The Preschool Race Is No Joke 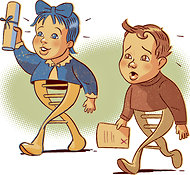 WILDLY implausible faux news stories appear each April Fool’s Day, some of which are taken seriously. This year’s clear winner was the National Public Radio feature about a preschool’s new requirement that all applicants submit DNA profiles.

As the segment begins, the host Guy Raz is greeted by Rebecca Unsinn, described as headmaster at a school called the Porsafillo Preschool Academy, located in a striking I. M. Pei-designed building in a leafy enclave on the Upper West Side of Manhattan.  Dr. Unsinn walks Mr. Raz through gleaming computer labs where toddlers master C++. She proudly describes the school’s Mandarin Chinese immersion program.

We are also told that Dr. Unsinn, a pediatric neurologist, was recruited to oversee the school’s new genetic tests, designed to help winnow 12,000 applications for 32 available spots in next year’s class. As she explains, “We now know that simple DNA testing can determine whether a child will end up at Yale or at Yonkers Community College.”

It’s a preposterous claim, of course, but some took it seriously. One Web site recounted the tale this way: “Parents being what they are today, the applicants to Porsafillo don’t even blink at the requirement, some going so far as to have the sample for the DNA test taken while the child is still in the womb, according to an NPR story.” Such reactions bespeak how bitterly competitive the battle for elite preschool slots has become in New York and elsewhere.