The Board of Supervisors voted 10 to 1 today to appoint City Administrator Ed Lee as interim mayor, but the decision is not official until Mayor Gavin Newsom steps down and is sworn in to the lieutenant governor’s job he won in November.

Newsom has refused to resign until the new Board of Supervisors with four new members is sworn in at noon Saturday. The new board is scheduled to vote Tuesday on Newsom’s successor, who will fill out the year remaining on his term. As for Lee’s chances to get the nod from the new board, he has it all but locked up. 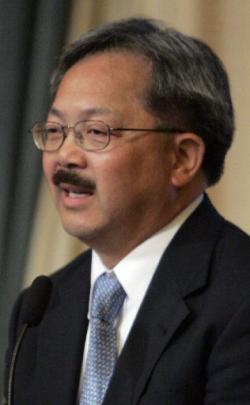 Seven of the supervisors who voted in favor of Lee today will still be on the board Tuesday, providing the majority Lee would need to get the job even without their new colleagues.

His selection would be historic: Lee would would be the first Asian American to serve as mayor in San Francisco.

Earlier this week, at its meeting Tuesday, four people were nominated for the job: Lee, Sheriff Michael Hennessey, former Mayor Art Agnos and former Supervisor Aaron Peskin. Lee and Hennessey each secured five votes — one short of what was needed to declare a winner.